The project aimed to develop and launch cooperation between regions in the neighboring countries (Slovakia – Upper Hungary, Romania - Partium, Serbia - Vojvodina, Croatia), where social groups are readily susceptible to innovation, on the basis of which all the knowledge, innovative and cooperative practices gathered since our accession to the European Union can be transferred in Western Transdanubia. This enables closer cooperation with those living in the border region of neighboring countries as well as "co-development".

During the course of the project a series of forums took place in the neighboring countries establishing the professional content of study visits held in Western Transdanubia in accordance with the interests of local communities that became known in the forums.

The experiences and beneficial, soul warming moments serving as good examples gained from the forums and study tours held during the project came out as a publication in the spring of 2015. 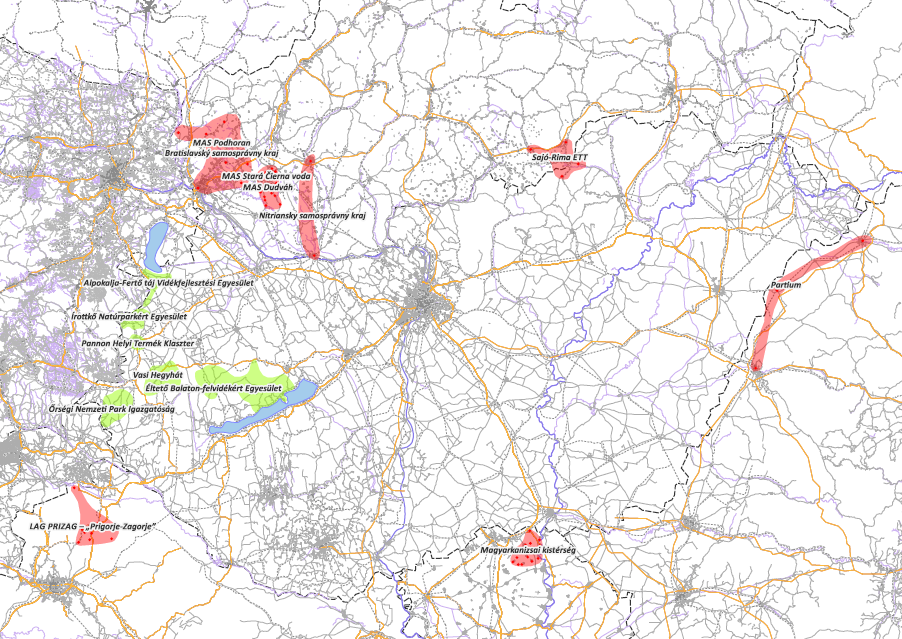 Organizations from across the border

Kanji¾a and its surrounding areas (Serbia)

The administrative area of Kanji¾a encompasses 13 settlements along the Tisza River, the economic and cultural center of which is Kanji¾a with a population of about 11,000 inhabitants. The majority of the 25,000 inhabitants living in the micro-region makes a living by agricultural production but industrial production and agricultural processing industry such as paprika-processing, fruit and vegetable freezing capacities are also present. The spa services leveraging the thermal water can be traced back to more than a hundred years of tradition.

The Green World Association also enhances the local community, which as an environmental nonprofit organization, aims to strengthen the environmental consciousness of the public through launching and organizing – educational – excursions, competitions, and tenders for children.

Meta terra is also a local, independent non-governmental organization that aims to enhance the relationship between local producers and consumers, and thus increase the consumption of locally produced food, namely through the so called „Kanji¾a Cart” initiative. Participants of the program as well as members of the community are committed to environmental awareness as well as healthy food production and consumption.

The Sajó – Rima / Slaná – Rimava European Grouping of Territorial Cooperation with Limited Liability is situated in the drainage basin of the Slaná and Rimava rivers, and incorporates the municipalities located in the countryside. The leader settlements of the concourse are Ózd and Putnok on the Hungarian side, while in Slovakia Rimavská Sobota and Tornaµa set examples to the surrounding villages.

The EGTC was established and operates with the purpose of providing the region with more help, preserving workplaces and creating new ones, improving sustainable transport and environmental protection, as well as developing the local economy.

Rimavská Sobota lies on the northern brim of the Gemer basin, in the valley of the Rimava river. It was named after the markets the settlement held on Saturdays. The food industry is of decisive significance to this day: milk factory, tobacco factory, sugar factory, brewery, meat processing plant, mill and bakery have been or are currently operating in the city.

Tornaµa is in the valley of the Slaná river, at the estuary of the Turiec stream. The region provides excellent conditions for small-scale tourism development,  the start-up of small farms and family businesses, which built on the rich agricultural tradition can operate properly according to the needs of the era, and thus create the conditions for the use of high-quality crops and the local use of products.

Bratislava Self-Governing Region is located in western-southwestern Slovakia, at the intersection of the former trade routes along the Danube and the so called Amber Road. It includes 3 areas: the Danubian Lowland, the Little Carpathians and the area called Záhorie. It is one of the main economic centers of the country. Thanks to its diverse geography, it is also an attractive tourist destination: water tourism, hiking, visiting cultural values and gastronomic programs are popular. From an agricultural point of view, the flat areas on the eastern and western parts of the county are more significant (the Danubian Lowland and Záhorie).

In the southwestern part of the county – in the Záhorie Region, on the western slopes of the Little Carpathians – Podhoran, the local action group and civic association is located, which was founded in 2007 with 14 settlements, 13 non-governmental organizations and 6 enterprises. The region is known for having a variety of protected natural areas and bird nesting places of local, national and international importance.

The LAG's activities and goals include increasing the region's attractiveness by the development of the basic municipal services and communal infrastructure, as well as creating the conditions for the development of rural tourism, relying on the region's rich cultural, historical and natural endowments and opportunities for cooperation.

As a result, in 2014 "Regionálny Záhorie Produkt" (Záhorie Regional Product) regional trademark was introduced, with a total of 23 products, accommodations, and tourist services.

The association's activities include:

·         helping the sale of goods produced by farmers in Érmellék, market creation and ensuring sales opportunities in Hungary,

·         helping the procurement of fertilizers, seeds and pesticides,

·         providing assistance in the exploitation of grant and tender opportunities,

·         supporting arable land culture, horticulture, and cultures of fruit and vegetable production typical of the area and farmers engaged in livestock and beekeeping

Local action group “Prigorje – Zagorje” was established in 2010 as the fifth LAG in Croatia. It covers an area of 11 local self government units with around 35,800 inhabitants. LAG PRIZAG is situated on the area of three counties in the northwestern part of Croatia. At this moment the LAG has 51 members from the public, economic and civil sectors.

The main activities of the association are the implementation of the LEADER approach in the development of rural areas, exchange of experiences and good practices with other local action groups in EU countries. For the last two years the LAG has been implementing the IPARD program.

Most municipalities are developing rural tourism and agriculture such as viticulture, herbs processing, cheese and honey production.

The Old Blackwater Local Action Group is located in the Danubian Lowland (Podunajská ní¾ina), in Trnava county (Trnavský kraj), specifically on the border of Galanta and Dunaszerdahely districts. The Dudváh local action group is located next to the previously mentioned LAG in the district of Galanta. The two organizations cover 18 settlements, with a population of about 28,000 inhabitants. Both action groups were established in 2008 as civic associations.

The region is characterized by hot and dry climate. The vicinity is abundant in cultural memorials, and unique natural endowments. Crop production, especially the growing of oilseeds, fruits and vegetables have a centuries-long tradition, this also plays an important role in the local residents’ willingness to farm effectively. One of the significant initiatives of the two action groups is the introduction of the Malodunajsko-Galantsko (Little Danube - Galanta) regional trademark, which symbolizes the region’s special endowments in the form of a stylized mill wheel. This suggests that milling industry and plant cultivation once played an important role in economic life: in the past, most of the water mills operated in this area in Slovakia. Poultry farming, fruit growing, vegetable cultivation, fruit processing, leather crafting, honey and pastries maker, potato pie and pancakes maker, ornamental plant cultivation, meat processing, accommodation and catering have trademarks among many others.

Our association has now been dealing with heritage preservation, conserving the values of vineyards and vernacular architecture for 30 years.

The local elderly passed on the craft of preparing thatched roofs, which we also preserve and use to this day. Related to this tradition, ethnographic camps are organized every summer where young people can experience and learn the steps of building cellars with harrow walls.

We assist pupils in their environmental education by organizing forest schools.

We regularly integrate handicrafts, as a basic human activity, into the children’s program.

We present the value of our wider environment, the Vasi Ridge through its intellectual cultural treasures.

Our basic aim is to assemble, develop, and urge the more effective production, display a coherent image and facilitate access to the market of the agricultural and handicraft products found and produced in Western Hungary. In Hungary, we were one of the first non-profit organizations that took the case of local products under our wings. To improve cooperation, we jointly created the Pannon Local Products Cluster with 16 organizations (folklore associations, associations of rural tourism, rural development non-governmental organizations, municipalities, joint authorities).

We organize local farmers‘ markets with the Chamber of Agriculture of Szombathely on a weekly basis. Furthermore, we deliver farmers‘ products through shopping communities directly to the consumer.

We attach great importance to the training of farmers through professional training courses, study visits, and benchmarking clubs. Facilitating sales, we give awareness-stimulating presentations among consumers.

Õrség is a part of Hungary where most of the population lives in the same place since the Hungarian conquest of the Carpathian Basin. This region is home to forests with clean air and rich grassy groves. The Õrség National Park is responsible for the protection of the area’s natural and cultural values. The most outstanding cultural values include the Õrség Folk Monument Ensembles that await visitors with furnished residential and farm buildings, play houses, and freshly prepared traditional dishes. Aside from the forests, fields, flora and fauna of this region, emphasis is also put on presenting the peculiar ecosystem of the sphagnum moor that is protected by the law. Here guests can visit the House of Moors and can go for a walk on footbridges. Furthermore, the program also includes familiarizing with the processes of traditional handicrafts such as pumpkin seed oil pressing, baking round pretzels, and pottery.

·         According to the contract signed with the Ministry of Rural Development, we have coordinated the planning and implementation of the use of EU LEADER rural development funds in 60 settlements since 2008;

The Cooperating Balaton Uplands Association was awarded with the Special Award for Rural Community Development of the Year by the Hungarian National Rural Network in 2014.

What do Kõszeg and the Írottkõ-Geschriebenstein Nature Park offer its visitors?

The wide range of programs, the Írottkõ lookout tower, nature trails, clear springs, historical and gastronomic festivals, castle theater, pedestrian and bicycle tours, and wine tastings in the town famous for its honor system cash boxes and in 15 settlements ensure that no one is bored in the region.

The Írottkõ Nature Park established in 1997 is located in the western border region of Hungary with a landscape abundant in protected natural values, as well as historical and cultural heritage. The nature park is named after the 883-meter-high Írottkõ peak situated on the Austrian-Hungarian border.

If you want to relax, or participate in active recreation, or learn about nature and history, what is more, try culinary pleasures - visit our EDEN Award winner region.

The Alpokalja – Fertõ táj Rural Development Association was founded at the beginning of October 2008, and includes about 39 settlements in the region. It operates in the Széchenyi Castle in Fertõszéplak. The association is engaged in a wide range of activities – as listed below – whose starting point and  main objective, according to their motto is "conserving  rurality but enhancing the quality of life".

-          operating the LEADER local action group within the legal framework,

-          introducing and maintaining the "Rural Quality – Alpokalja-Fertõ táj trademark network”, as the center of which the work organization operates,

-          sustaining the so called Heritage Network and encouraging new initiatives in addition to the already existing programs.